Clarification: Last Jam Of The Year

My email a few moments ago said the last jam will be 10 December. I meant the last jam of the year will be on the 10th.

I didn’t want to leave anyone with the impression that we wouldn’t be meeting again.

The next and last jam of the year will be December 10th. Note: this is actually the 2nd Thursday of December.

Here’s the link to the schedule:
https://athensdulcimerclub.wordpress.com/announcementsnotes/

May you have a blessed Thanksgiving.

Let us come before him with thanksgiving and extol him with music and song. Psalms 95:2

…give thanks in all circumstances, for this is God’s will for you in Christ Jesus. 1 Thessalonians 5:18

Do not be anxious about anything, but in everything, by prayer and petition, with thanksgiving, present your requests to God. Philippians 4:6

This may be a repeat for some of you but a good story bears repeating:

Ready to SOAR: Athens senior is first to earn coveted spot in The EAGLES Program at Auburn University

Athens High School (AHS) is pleased to announce that senior Anna Lee Thomas is the first-ever Athens SOAR (Specialized Opportunities for Adolescent Readiness) student to be accepted into the EAGLES Program at Auburn University, cohort fall 2021. The EAGLES Program is a comprehensive transition program for students with intellectual disabilities. EAGLES stands for Education to Accomplish Growth in Life Experiences for Success and is part of the Department of Special Education, Rehabilitation and Counseling at Auburn. Anna Lee was selected from a competitive group of 31 applicants for one of only six spaces in the program.

Anna Lee is the daughter of Rhonda and Jason Thomas of Athens. The Thomas family never dreamed that Anna Lee would be able to go to college, much less a Division I SEC school like Auburn.

From the time she was a small child, Anna Lee told her parents that she wanted to go to college, and not just any college. Anna Lee wanted to go to Auburn. Her parents never told her she would not be able to go, only that she needed to work hard, do her best, let her light shine and wait to see what could happen. And so that is exactly what Anna Lee did.

“We are so excited that the Auburn legacy lives on in our family! This is such a blessing for her and one that many of us, family and friends have prayed would happen. God has heard our prayers and desires of her heart. He has answered our prayers. To say we are thrilled is an understatement,” said Rhonda Thomas. “Thank you to everyone that has played a part in her education and to those who wrote letters of recommendation. From the bottom of our hearts, we are grateful for each of you. We are excited for this next chapter for her life and for Anna Lee to get to experience the Auburn family.”

“This is the rewarding part of the job when we get to see all of the goals and expectations we have had for a student become a reality. Anna Lee, with the incredible support of her parents, teachers, and support staff, has shown us that if we hold our expectations high, students will meet those expectations and even surpass them! I have learned so much from this amazing young lady throughout her years at Athens and consider it an honor to have her represent our district and community in the EAGLES program at Auburn University. War Eagle!” said Athens City Schools (ACS) Exceptional Services Coordinator Dr. Jessica Lynn.

According to the Auburn University website, through either a two-year or four-year residential program, EAGLES students work to become contributing members of society by combining university classes, on- and off-campus employment, volunteer experiences and on-campus collaborations. The program is comprised of five major components: Academic Enrichment, Independent Living, Employment Preparation, Interpersonal Skill Development, and Health and Wellness.

The instrument was made in 1980 by John Rawdon of “Dulcimers By JR” out of Newcomerstown, Ohio. The bling was added a couple years ago.

Rumor has it that Roger W is waiting until the last moment to place his bid.

In case you missed it, Dolly Parton’s gold painted Swarovski crystal studded dulcimer is going to be auctioned off by Christie’s auction house for charity. This on-line auction is expecting to bring between $50,000-$100,000. My guess is this’ll be the costliest dulcimer ever.

Rumor has it that Al M. has been seen going through his house looking for spare change under all the seat cushions and pants pockets.

Some of the details from the press release: 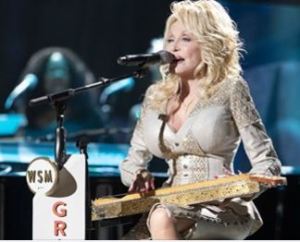 After about six months Athens Dulcimers met last evening for our regularly scheduled jam!! And, as icing on the cake, we met in the new Athens Recreation Center. The new rec center is very nice (did I mention new?) with excellent acoustics.

The first song we played was “Wild Wood Flower”. There were thirteen of us that met and played and even with the masks it was wonderful to get back to some semblance of normalcy. And we weren’t “too” rusty in our playing, there is a knack to playing with others.

We hope to see another good crowd on 17 September.

Don’t forget that Tannehill SADA festival is next week and promises to be a good time (I believe it’s all outside).

The day before yesterday Jimmy Biggs, Al Maiorano, Jerry and Louise Todd, and David played outside for the residents at Traditions of Athens Assisted Living to another appreciative audience.
See https://www.facebook.com/watch/?v=1308379672846223&extid=zUxcL7e3OTNLE31l

We missed those who couldn’t be there last evening and look forward to the time when everyone can come out and play!! In the meantime there is NO reason why you shouldn’t play your dulcimer today (in fact, do it right now!!), you’ll feel better if you do, I promise.

Al & David got out and played Saturday for Play Music On Your Porch Day. Anybody else?
https://www.youtube.com/watch?v=ojpLMvDIa78

My good friend Dan Cox, aka Dulcimore Dan, from New Tazewell, Tennessee began making dulcimores in 2012. The dulcimores Dan makes are traditional in that he only uses a diatonic fretboard (no extra frets) and uses the fundamental building techniques and designs of the old masters while still incorporating his own special touches. Dan’s latest dulcimore that he calls Master Mawhee is based on an old-time dulcimer maker from the late 1800s named John Mawhee (1844-1929).

John Mawhee was a Cherokee Indian from the Indian Territory (now Oklahoma) who served in the Union Army during the Civil War as a member of the Indian Home Guard. He was an accomplished fiddle player and luthier before the war. It is not known where Mawhee first encountered the dulcimer, but it is said it was while in the Army that he devised the pattern for his dulcimer. He called his dulcimer a “walking cane dulcimer” as did four plus generations after him. The story goes that during the war his horse fell on him breaking his leg which was never set right causing one leg to be shorter than the other. To steady his gait Mawhee incorporated a handle at the top of his instrument and placed a large nail at the bottom, creating a cane. After the war he settled in southern Missouri.

Now back to Dulcimore Dan’s instrument. This particular instrument Dan built, while partiality patterned on John Hawhee’s dulcimore, is not traditional in one small detail, it is over nine feet long!

When asked what led him to build an instrument on such a largescale, Dan told me, “…COVID-19 has everything shut down. In five months I’ve been to the grocery and hardware store. I go to work every day (medical supply) like nothing is going on and this is what I do for excitement! … and I wanted to see if I could even do it….”

Much of the wood Dan used was wood he re-claimed from various sources. Dan began construction with the peg head using pine 1X4s from salvaged pallets that he laminated.

Then he made the tail piece from three laminated pieces of very old heart pine. Said Dan, “I selected the heart pine for strength seeing it would be anchoring a number 18 and two number 8 music wire pulled up as high as they can go.” The string anchors are two one-quarter inch bolts cut off and the ends rounded.

Next is the staple board made from two spruce 1X4X8s that he obtained from the local hardware store.

The side bows are one-eighth inch shipping plywood he salvaged from work.

Dan makes his own dulcimore strings for his instruments and the Master Mawhee were no exception. Dan explained, “I thought I’d have to make up a wire twisting tool but I tried to make a loop end with the tool I have and it worked fine! I made up a string and strung the melody string. I pulled the string to what I thought the tension should be and then made another two strings. I strung them and continued to raise the tension on the bass string until I got to an A1. (It was just a little tense seeing I didn’t know if this thing would hold just under 200 lbs. of tension!)  I made a staple placement tool and it worked wonderfully! I marked the staples and quickly played Shady Grove on the upper registry… I pulled the .041 bass string to A1. The melody and middle drone are .020 and tuned to E2.”

This diatonic instrument is 9 feet and one-quarter inch long and weighs 28 pounds. It has an 89-inch VSL and seventeen .090 staples set by ear. The homemade strings are .041 bass and .020 middle drone/melody. The dulcimore is tuned A1, E2 and E2 Ionian. Dan finished the instrument with black alcohol stain and shellac finish.

Dan says clearly building something to this scale requires a lot of thinking, ingenuity, and constant tinkering, “I’m in the process of figuring out the dynamics of the Mawhee set up. Taking a large string (.020) and drawing it up tight (over 50 lbs.) gives it a quick, clear tone. The machine tuners make it possible seeing, the wooden pegs could never draw up that tight.”

When asked what his next project is Dan replied, “What I’m really after is a 33-inch VSL, very light and loud and it’s called Majestic…”

You can find more specifics on how Dan crafted this dulcimer on his blog at http://www.dulcimore.com

Louise told me that will resume playing at the Rec Center in September. We will have the same dates and time.

To make it even better we will be meeting at the NEW Athens Recreation Center (Sportsplex) at 21821 Sportsplex Loop, Athens, AL 35611

Masks and social distancing will be required

I can’t wait to see how great we all sound now that we’ve had nearly six months to practice!!

Athens Dulcimers
Create a free website or blog at WordPress.com.